Every car has a story to tell, some are quicker reads than others.  This one it seems is on the longer side of things. 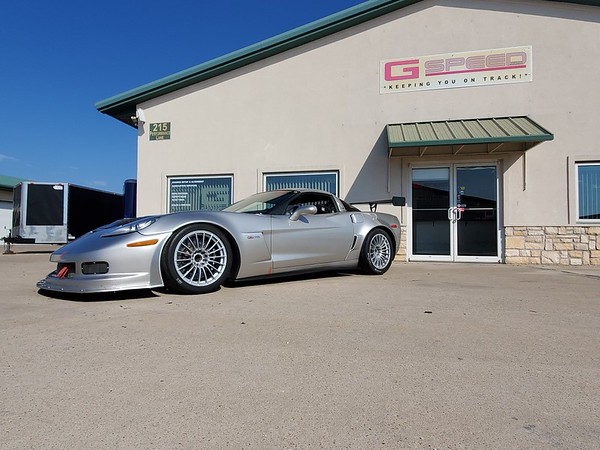 Eric’s C6Z was purchased as a already running and in process track car project started by another shop some years ago.  Changing hand a few times the years and miles on track were starting to show but it had a decent enough start to work with.

When the car arrived to us, Eric wanted to clean it up a bit, update the car and sort it out to see what might have been missed during the first inspection.  Some items changed for appearance, some for performance, and some just to clean the car up.

List of items to do on this first trip was change back to a traditional OE length nose (from the extended Blackdog piece), a larger splitter, flip the radiator for increased breathing and downforce, GSpeed/Penske coil overs, Motec ECU with launch control, Dailey dry sump and some clean up. 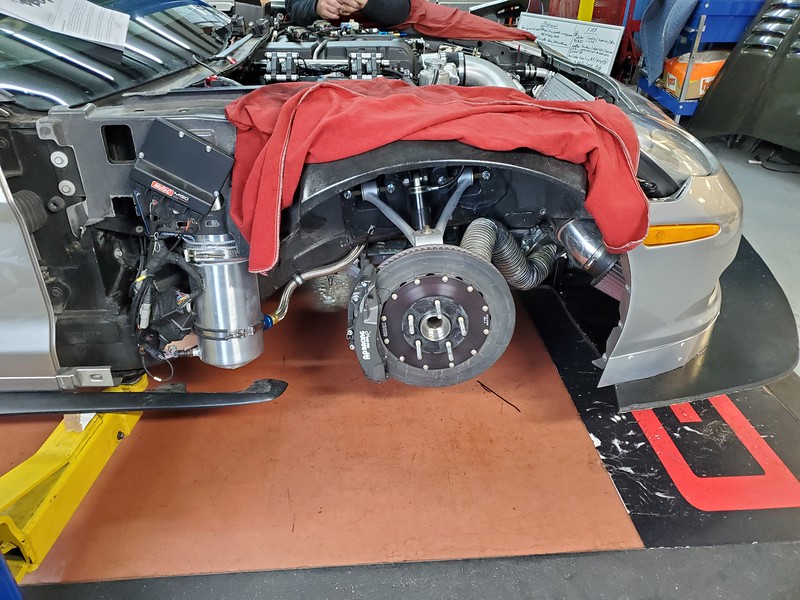 Here you can see the massive AP brakes by Essex Parts, our custom Peterson tank, our own Motec harness and ECU package and the new nose installed. 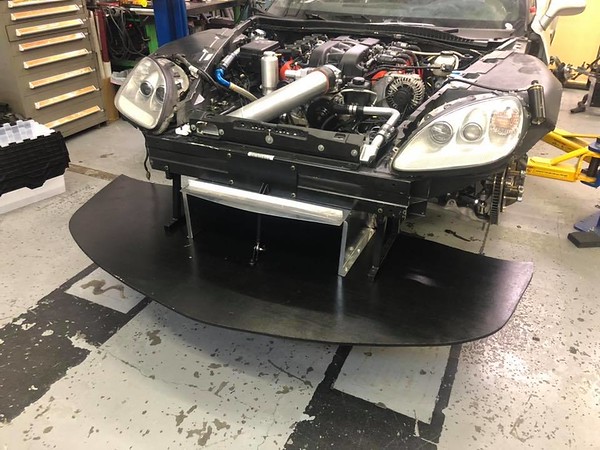 How big?  The new splitter is a healthy one as we need all the front grip we can get.  Of course with the nose off it looks absolutely massive in this picture.  You can also see the new custom intake duct, radiator hose, as well as the full radiator nose duct work to seal air going in to cool the beast.

The splitter is fully supported directly to the frame with a majority of the holding power built into the new radiator support.   You can also see our coil over package featuring Penske racing shocks.  Billet drop spindles, T1 sway bars, and a front bump steer package help round out the front of the car.

Closer look at the radiator duct work and center splitter support which is also adjustable to make sure the splitter stays at the correct angle.   All of these pieces are made by craftsmen right here at GSpeed. 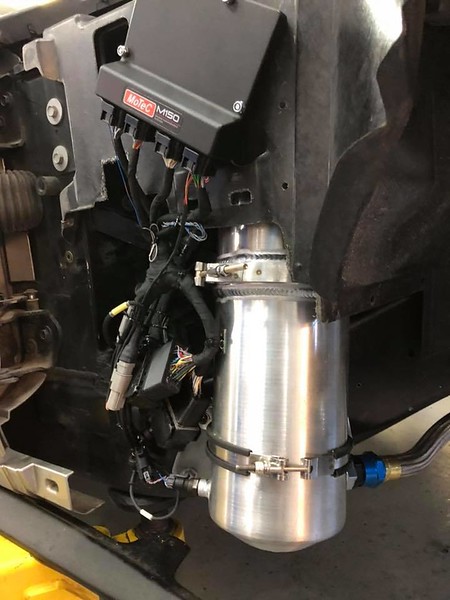 The oil tank is built to our spec by Peterson Fluid Systems to hold as much oil as we can fit in the car.  Lines are Brown and Miller which we make in house.  The BMRS hose line allows us to use as big of a line as we can fit while keeping everything light weight and extremely flex able.  You can find BMRS hoses and fittings on everything from NASCAR to F1.   Of course, our own Motec plug and play harness and M150 controller are going to be handing engine processing duty.

Flipping the radiator allows us to block off the air that would have been routed under the chassis and now venting it out the hood louvers to create more downforce.  It also opens up room in the front of the engine bay to re-duct our air inlet system as well to a much larger tube and filter arrangement.  Bosch Motorsports ABS was added at this point as well for greater control of the massive brakes and tires the car was now going to be fitted with.  The amount of downforce, traction, and stopping power we now have at the driver’s command the OE system just can not properly give us the maximum amount we can use.

At this point only minor updates were done inside the car to get it up to code and ready to run, with the mechanicals being the most important updates to the car.  Of course it wouldn’t be complete without a Motec display and new center stack for engine and TC controls!  A full dash insert was made here in house to mount the Motec display.

Prior to departure we dialed in the launch control and traction control here at the track outside our front door, Motorsports Ranch in Cresson TX.   Few sessions on track and it was ready to go back home.

So how did the changes help the car and a brand new combo?   Pretty well we would say. 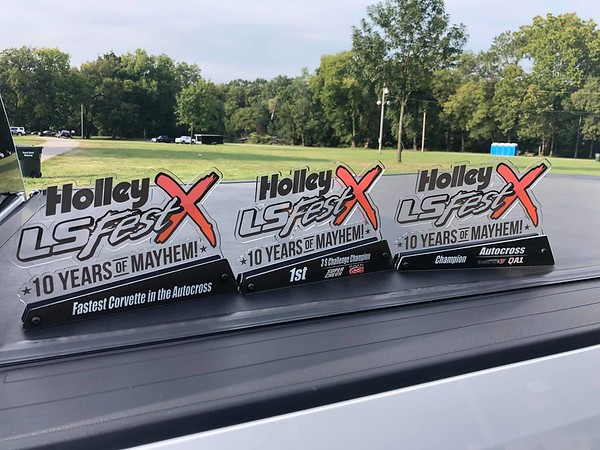 Eric took home some hardware, and software alike during his trips to LSxFest, UMI King of the Mountain, and Gridlife event at M1 in Michigan.  While he didn’t take home top prices at LSFest or UMI he did place in the top rank finishers and did win class at the Gridlife event at M1.   It was here Eric found the 427 just couldn’t quite maintain the straight line speed of some of the more modified cars on track.  Plans were made for round 2!   All in all, with a new car, new combo with little practice time shows a great testimony to keeping the car together and predictable for the driver.  Eric did a great job of showing his talents behind the wheel as well!!

That is what it should say as this was when the little things started to show.  The plan itself was simple.  Add more.  More power, more aero, more clutch....just more.

First step, gut the car and get it cleaned up.  This is SEMA after all.  The interior needed some work and it was here we found some small issues with the cage that needed to be addressed. 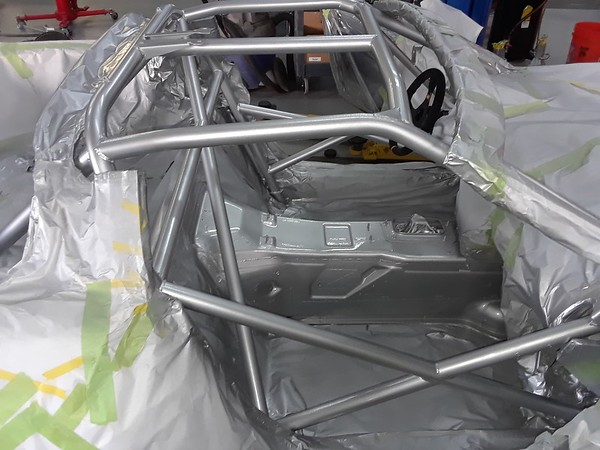 We added one bar to the cage, some gussets and finished welding the cage at the first installer had missed, in more than one location.   Since we had it down this far Eric wanted to match the inside to the outside so everything was stripped, cleaned and prepped for paint.   Now typically we would pull the car down to a bare frame to do this, but with SEMA only weeks away and more work to be done, we pulled critical items and painted. 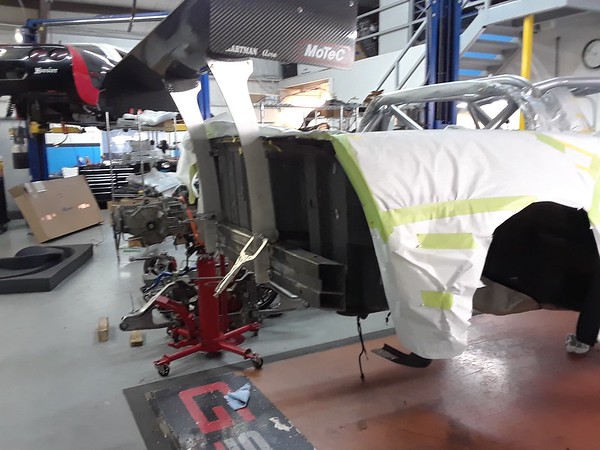 While we have the car apart, why not try and add some more rear downforce?   Bigger wing, move it up, and instal direct to frame mounts for a more rigid system. 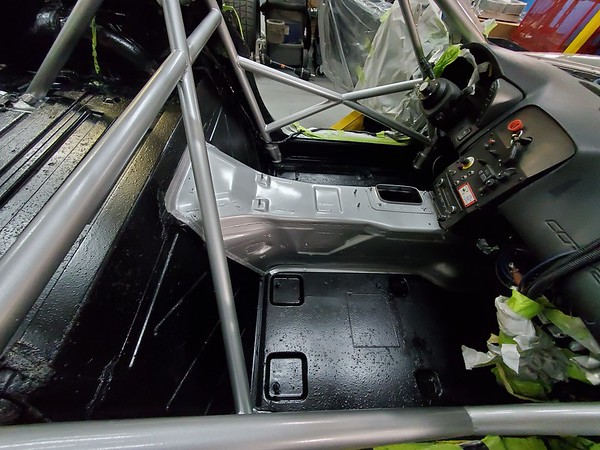 The cage and center console were paint matched to the body work of the car, while the floor and trunk area were covered with a non-slip semi gloss black.

Here you can get a better idea of what had to be removed.  Roof off, hatch off, windows out, and inside gutted.  Trim panels were re-made, wiring cleaned up, and entire passenger side was re worked to clean up the driver’s cockpit. 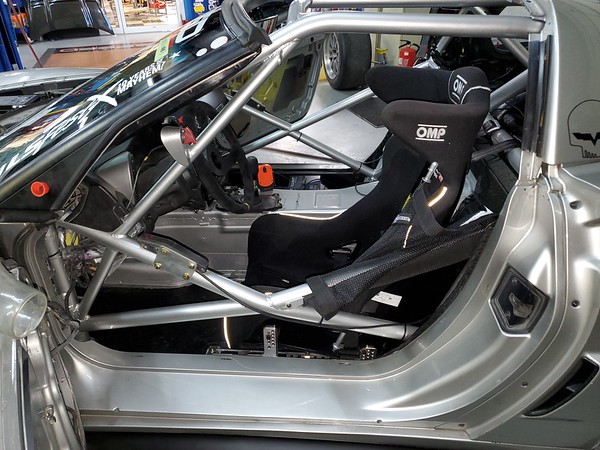 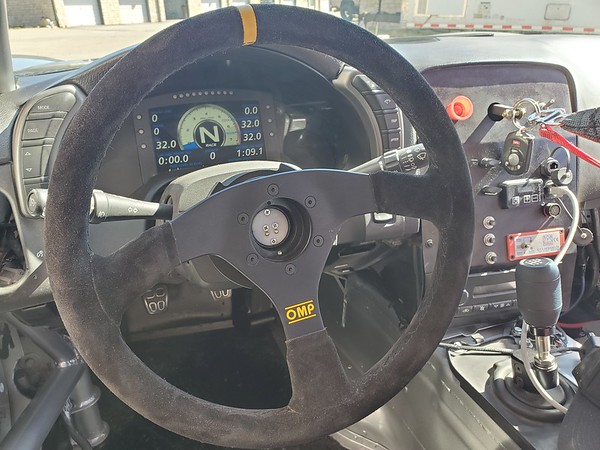 Here you can also see the Motec dash that was installed in round one of the modifications and center switch panel.

While we were hard at work on the paint and interior our friends at HorsePower Research were busy putting together a 468 cubic inch LS7 monster to add some needed power to the car.

Similar to what you might have seen us use in our own in house #480 Z06, we had them do a similar spec 468 for us using Tony Mamo prepared TFS LS7 heads.  HPR setup the short block with their custom rotating assembly, hyd roller cam ground by Comp Cams to their specs as well as a very proven valve train setup with Comp BSR shaft mount rocker ams.

Once the long block was back we needed to transfer over the remaining items, along with some new ones before dropping back into the car.

It was also at this time we found our first surprise, the clutch and driveshaft were both in need of replacement. 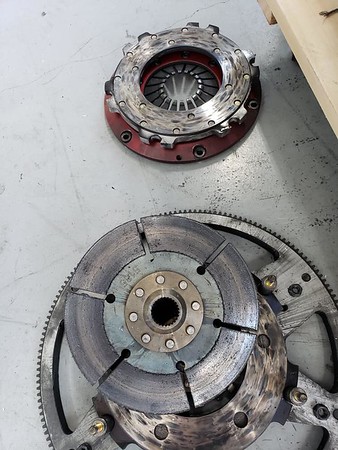 Will at Centerforce was happy to get us a new assembly in time and we went about driveshaft upgrades before dropping the engine into the car.

Setback, but a rather small one....clock is ticking faster at this point as we are only a little more than 10 days out. 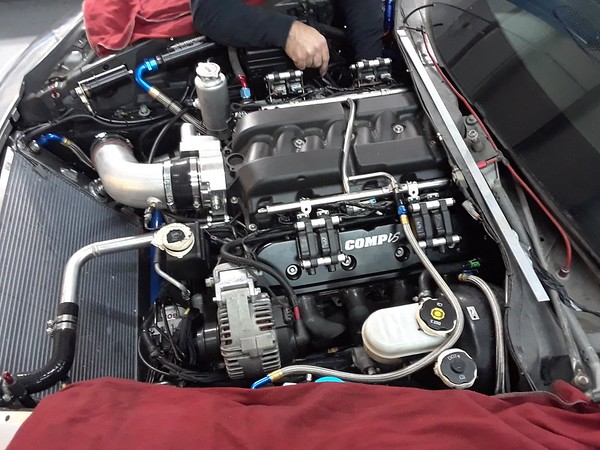 With the new driveshaft and clutch in place the engine goes back in.  Dailey system, intake, TB, accessories, covers, exhaust are all transferred over from the old engine save for the valve covers.  To add some finish to the new setup a pair of billet Comp valve covers with valve spring sprayers were installed to top off the HPR 468

Does this wing make my butt look small?

Friday afternoon (we plan on leaving Saturday evening), the engine fires up and off to the dyno.  A few minutes of run time and we found a small leak at the front of the engine.  After just installing new seals when we did the Dailey after the first trip and no signs of damage, the seal decided to open what must have been a small tear.   Let it cool off and start pulling it back down.  Not so quick seal replacement Friday night and Saturday morning we are back up and running.   At least the car was up and running.  Between Friday and Saturday, the computer on the dyno decided it now does not want to run.  We still have full control over logging and air fuel so we proceed to break the engine in going off ECU feed back and the wide band sensor. Based off of our fuel use, timing, and air/fuel everything is healthy but no way to get numbers til after SEMA.

So what else could happen with hrs left to go?  A solid high pressure power steering line during one of the last pulls on the dyno decides it would rather stay in Texas than make the trip to Vegas so, one more change out before a quick shake down and into the trailer.

Sunday afternoon, the car takes it’s last few glamor shots and into the trailer.  The Corvette made it to Vegas today on time to load into the SEMA show and be ready for the Optima Challenge event after the show.   New BFG’s wrapped around those awesome ForgeLine wheels and powered by 468 cubic inches of glory it should prove to be a very quick car on track.

What’s in store for Round 3?   Not sure at this point, but if the past tells us anything there will be more decorations for the trophy cabinet before it heads back to us for the next round of upgrades.

Thank you again Eric for allowing us to help you continue your project!!