Remember those teachers who taught you stuff but you sometimes didn't really feel like you learned anything?

Did we go faster? Weeeelllllll. Sorta?

We were blessed with very similar conditions to our first test. Again it had rained for the days leading up to the test and the sun rose on a very green track. However today we had a lower air temp and good sun on a warming track. This means that in typical TT fashion the early session would be the ‘money session’. 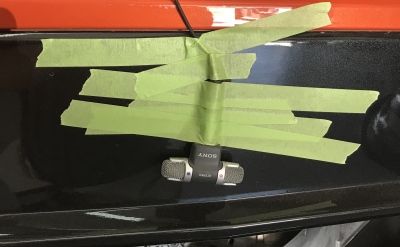 Chase put the finishing touches on the seat that morning. A nice OMP race seat and he worked to get it as low as possible and a touch reclined. It is absolutely awesome. I sit lower and while the GM competition seats are nice, they are no match for a real seat. Thankfully the factory seat belt is fed through the holes and while I can’t snug it super tight by powering the seat back and then up, I can get the ratchet pretty tight and I sit deep in the seat and it’s awesome. 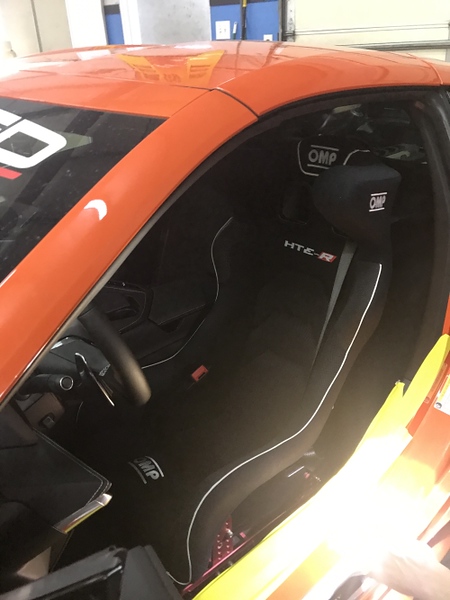 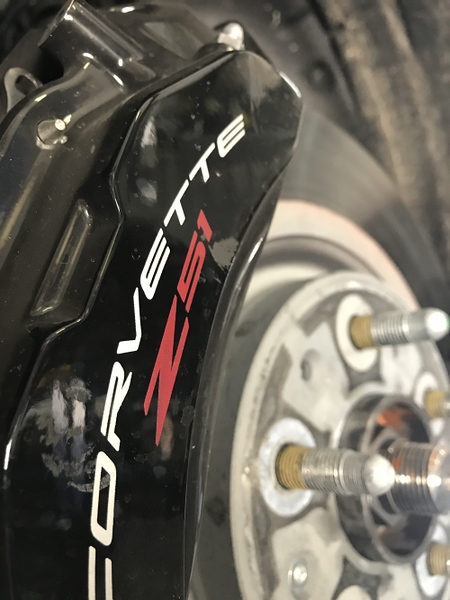 Cool and crisp and I go out on the Michelins again, exact same setup as last run that gave us a mid 22. While the weight is the same, it is a bit different since we’ve pulled the seats and put in a single race seat. We are completely full of fuel to make the overall weight within a few pounds and after 5 laps to warm up and then a quick bleed back to 32 hot and a quick lookover, I found a gap and ripped a low 21. While passing two cars. The behavior of the car was the same: a bit of work to get the car to rotate in and then mind the oversteer on the exit. The tires felt a bit vague of course because they are streets and runflats at that. Pushing harder is a false goal, the car gets pushier coming in and oversteerier going out. Yes, that is an absolutely a real word and I should know because I just made it up.

As with any person on any track pretty much at any time, we just wanted more speed. More throttle more of the time. For this, we’d need more grip. Because more grip means you can go faster. Faster into the corners, faster in the corners, faster out of the corners. Faster down the straights. Faster. We like faster.

Non-Stock tires....surely we'll got a lot faster on 100tw tires!

Now, there are many ways to go faster. Power gives us faster in the straights. Less weight gives us faster everywhere since the tires/engine/brakes have less mass to manage. Aero (done right) is faster. Mmmm…faster.

The easy button on faster is stickier tires. A really sticky tire makes more grip and just give us faster everywhere. We are able to use the power sooner, the brakes later, and more speed in the corner because grip goes up. I’m not sure if a bigger smile comes from more power or more grip. Tough call really.

So. Hoosier. The go-to weapon of choice for tires. Finspeed has already been by and measured the car and we have wheels coming to work with a 315f and 335 or 345 rear. Oh yes. While Hoosiers are costly, they have a good contingency plan and we’ve frequently been fortunate enough to win new tires. But the 18” Finspeedwheels aren’t ready yet. <sigh>

The list of folks making tires in the OE sizes is short. There are a few making tires that are close and we scoured many websites to figure out what could work, what might work, and what didn’t cost crazy money.

Balance. Life if all about balance. A dichotomy if you will. While Louis and I tend to want to do whatever is needed to get the best time out of the car right away, that is weighed against the progression Slick is taking. As much as it shocks us, the typical GSpeed customer will not likely gut/cage/build/race. They will keep the use of the car in balance and spend a good bit of time on the street as well as some time on the track. Chevrolet has made a good car that runs cool and strong and honestly a deep 1:21 with only an alignment is very stout.

So we passed on the super sticky and focused on something a typical track/street driver might choose and we settled on the Toyo R888R. This is a 100TW tire and frequently used by the ‘drive it to the track’ crowd and has a good following. It is surely not the fastest tire (and not marketed as such), but provides a good ‘balance’ for the dual purpose crowd.

Going up 20mm in the front and 10mm in the rear seemed like “not too big” a step and again, something that track folks might try as well. Pressures….all over the map. Toyo themselves say 32-38 hot. Folks we know said the low side, with a few experienced track folks saying 29-30 is the hot ticket.

So I launched and was instantly in some fairly quick traffic (25s). This worked out just fine for me to work off the mold release and gently bring the tires up to temp and pressure. I’m running 90% or so and the car is behaving just fine. Nothing bad and honestly it felt about as same as the streets. More vague on turn-in, but I expected that. Once Slick had taken a set it seemed like I could roll into the throttle a bit harder and the braking seemed improved. After about 5 quick-ish laps, I pulled in to get the pressures bled down to 35 and I went right back out into a nice gap. Time to really step it up, push the car and find out how many seconds we’d drop.

Let me sum this up in two words: Hot Mess.

When I ramped up my speeds and worked the car to drop time it fought me. It didn’t want to turn in, and when I slowed enough to get rotation and fed in power it went right to oversteer. Like…right to oversteer…even at moderate throttle. I endured this for a few laps, radically altering driving style to try and get the AIM SOLO to display something acceptable.

Let me sum that up in three words: Not Gonna Happen. The SOLO just laughed at me <Think Jabba at his palace>

So, we come in and double check….everything. We ensure the alignment is right and actually make a few small tweaks and drop the pressure down to where the experienced folks say and I go back out and those same two words keep ringing in my ears. Hot Mess. I’m still a second off the Michelin times. On brand new triple 8Rs.

We try some pretty big changes over a few sessions and while they have impact, nothing is nearly impactful enough to get us in front of the Michelin times. 100treadwear vs 300treadwear runflat and we guessed that wrong?

So the Michelins go back on and the times fall back down (adjusted for heat). Again, I start off in traffic and at 90-95% the car is back to its normal-ish self. Turns in pretty good, is predictable, and although we lost a bit under braking the same thing happens when we push for that last 5%. Hot mess.

Back on the pad. Double check nothing has gone wonky.

Again, we try some changes (including a rear ride height change that we know works on C5/6/7) and again we get small impacts but nothing in the scale we need. We try some hot-pit changes and even try a big change we’re not ready to discuss too much yet, and while it dramatically helps one aspect, the corresponding aspect is hurt reflecting the dichotomy of chassis tuning.

Adam T shows up and takes Slick out for the back half of a session. He reports the same thing (and has a few fun slides to show for it!) and got some cool helmet-cam video as well. 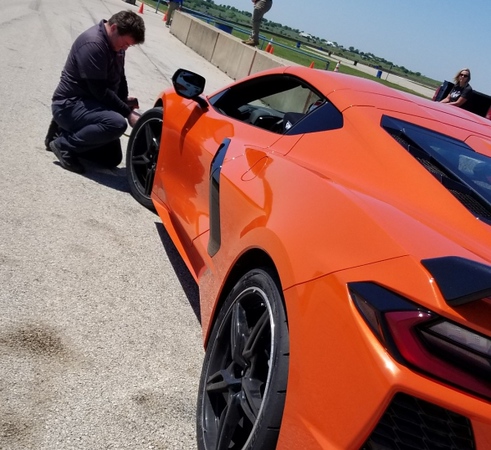 So we learned. We learned a lot. We’ve got good notes and we have a list of things to check and a plan for next time. And while we’ve learned, we have more to learn to unlock this chassis and what makes it fast.

Chase and Ian make the next round of adjustments at pit wall....I snap selfies behind the wheel. #GoodTeam

Interestingly, on my way home Chris Ramey and I caught up. He runs a really slick C4 corvette (with HPR 468!) and has won Optima (as well as a Solo Nats back in the day!) and has a good grasp on chassis tuning as well. He's fast in whatever he gets in and we speak the same language. He relayed that he was in his ZL1 recently at a track day and was told something very counter-intuitive to fix a handling issue. The only reason he tried it is because he was told by someone he trusted and it worked. Completely against ‘rule of thumb’ knowledge and it stumped him (and me!). Are new chassis creating narrow tuning windows? More research needed.

HUGE CAVEAT PART 1: Folks…please understand these true and complete notes (well…we are withholding some things we tested and their impact) apply when you’re really really pushing. Really really pushing. Reigned in just a bit (say 90-95%), I was able to run with well driven C6/C7s, GT3s and the like also on 100/200treadwear tires driven by very capable HPDE folks. Would these folks be at the pointy end of an SCCA Super Tour? Likely not. But I feel this is an important statement. I was pushing to get the last bit of speed out of the car. This means in the safe-to-push parts I was pushing with every bit of the car that was available. All this ‘hot mess’ talk is in that last 5%, but that is where the fastest laps live and so that’s the landscape we need to occupy.

HUGE CAVEAT PART 2: While we certainly know the C5/6/7 chassis and how to make those (and many others) fast, we are applying strategies and approaches that have worked for us spanning decades of making a broad range of cars fast. Even ones with a significant rear weight bias. Like anything new, we’ve got to learn how to find the rates and geometries that make the car truly fast and we have the tools to do that. It'll take time, but anything worthwhile does.