Forecast looks good for the 28th/29th of March...track plans in place.

While we have had the car in the shop measuring, photographing, and prepping for it’s first run on track we have had a little bit of time to put some miles on it getting the required 500 break in miles finished before hitting the track.

During this time we also made our first modification, and work in progress for a new part fo the C8, our light weight track exhaust. 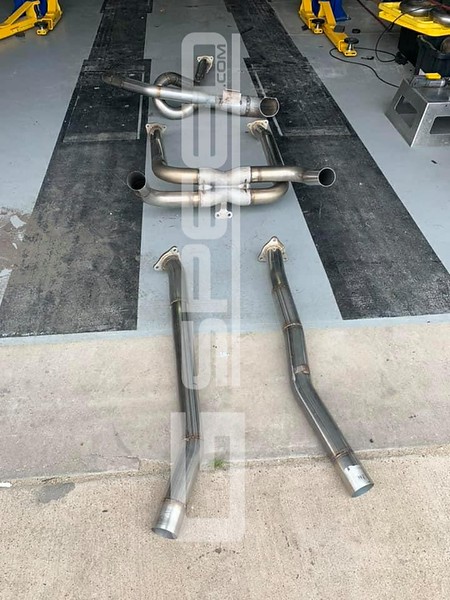 This will be a track only piece as our first design will eliminate all restriction after the OE manifolds.   It will also remove close to 80lbs of weight from the car.   Added bonus is that it sounds very similar to a first generation Daytona Prototype on track!

The day by day by day rain left us with an extremely GREEN race track which will not help in making a record run but it will let us figure out if there are any major issues that need to be solved right away.   Will it over heat?  Will it cord the tires?   Will the transmission not hold up?.....  We did have a rather calm day with air temps in the low to mid 70 degree range but even the C7Z would have issues at that temp with a able driver.

So without further delay.....

What did we learn?

Brake by wire is non issue, stock tires are 300tw run flats, video says 3675 no driver, it was meant to say 3675 WITH DRIVER. car has LOTS of front grip, were exploring more grip over all. So far, extremely excited for the platform and what we can extract out of it.

For comparison, a stock C6Z runs similar times as does a Viper TA, and Camaro ZL1LE runs 1:20.xx. Lets not forget that this is a BASE model car on 300TW runflats.

Thanks to Finspeed for the upcoming wheels, George Matick Chevrolet and Alan Johnson for getting us taken care of, the whole team at GSpeedfor taking the car apart 23172612356 times, Adam and Tim at Doghouse Performance for getting us on the alignment rack a few times and getting us back on track quickly and of course Paul Costas for the wheeling and Austin Wallace for the snaps and video help!

More to come, including wheels, brakes, tires, and race seats in the next two weeks!